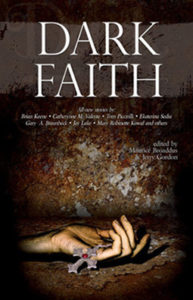 Faith.  So much of our reality is determined by what we believe, and it can so easily be… undone.

Editors Maurice Broaddus and Jerry Gordon have created an anthology that explores, questions, and shatters the boundaries of faith.

Pick up a gun and write a new psalm with Brian Keene.  Confront the inhumanity of modern society with Gary Braunbeck.  Find magic behind the suburbs of Portland with Jay Lake.  Walk the line between art and desire with Tom Piccirilli. Through twenty-six stories you will be transported from the rooftops of the twin towers to steps of the Vatican.

Dark Faith is available directly from Apex Publications, as well as Barnes and Noble and Amazon.

The Days of Flaming Motorcycles by Catherynne M. Valente

“It may be the best anthology I’ve ever read…reads like a ‘Year’s Best’ rather than a nominee for it.”
~Horror Web

“Terrible beauty and mind-shattering horror. It’s all here, in what’s sure to be one of the year’s best anthologies.”
~ Shroud Magazine

“No matter what your ideas about heaven or hell or religion (or lack therof) are, this book is designed to challenge you, to make you think, and most importantly, to entertain you.”
~ Sevier County News

“The Story of Belief-Non” by Linda D. Addison (poem)
“Ghosts of New York” by Jennifer Pelland
“I Sing a New Psalm” by Brian Keene
“He Who Would Not Bow” by Wrath James White
“Zen and the Art of Gordon Dratch’s Damnation” by Douglas F. Warrick
“Go and Tell It on the Mountain” by Kyle S. Johnson
“Different from Other Nights” by Eliyanna Kaiser
“Lilith” by Rain Graves (poem)
“The Last Words of Dutch Schultz Jesus Christ” by Nick Mamatas
“To the Jerusalem Crater” by Lavie Tidhar
“Chimeras & Grotesqueries” by Matt Cardin
“You Dream” by Ekaterina Sedia
“Mother Urban’s Booke of Dayes” by Jay Lake
“The Mad Eyes of the Heron King” by Richard Dansky
“Paint Box, Puzzle Box” by DT Friedman
“A Loss For Words” by John C. Hay
“Scrawl” by Tom Piccirilli
“C{her}ry Carvings” by Jennifer Baumgartner (poem)
“Good Enough” by Kelli Dunlap
“First Communion” by Geoffrey Girard
“The God of Last Moments” by Alethea Kontis
“Ring Road” by Mary Robinette Kowal
“The Unremembered” by Chesya Burke
“Desperata” by Lon Prater (poem)
“The Choir” by Lucien Soulban
“Days of Flaming Motor Cycles” by Catherynne M. Valente
“Miz Ruthie Pays Her Respects” by Lucy A. Snyder
“Paranoia” by Kurt Dinan (poem)
“Hush” by Kelly Barnhill
“Sandboys” by Richard Wright
“For My Next Trick I’ll Need A Volunteer” by Gary A. Braunbeck

The Guys Behind The Book: